I enjoy playing computer games, but I’m not a hardcore gamer by any means. I probably get a few hours in every week nowadays, and I am still fortunate (or unfortunate) to have the ability to get totally sucked into a game. There is a good bunch of games that I like to play every now and then, but at the end of the day, two games stand head-and-shoulders above others by my reckoning.

Until the release of Sensible Soccer, the Kick Off series was pretty much considered the best football games for the Amiga. I remember playing it a lot with brother and enjoying it a great deal, but I also remember how difficult it was. It was very hard to have any sense of control over the ball, and the vastness of the football field meant that you had to use the radar/scanner in the corner of the screen to get a sense of where your players were.

In my mind, Sensible Soccer took the good parts from the Kick Off series and improved on pretty much everything. The graphics were more engaging – charming, even – and the fact that you always see either the penalty box or the center circle of the field means that you have a much better understanding of where your players are and what is going on.

And then there was Sensible World of Soccer which added a managerial side to the game and took it to another level. Having a 20 year career where you could choose pretty much any club team in the whole world, build that team over several seasons, move to another team or even become manager of your national side added a new dimension to the game.

I must confess I haven’t played Sensible World of Soccer much in the past few years, but I have written a program that lets you search for players based on different criteria. It has the incredibly clever name SwosPlayerFinder, and the source code is available on GitHub.

Geoff Crammond is the creator of the legendary Grand Prix series of games. The first in the series was released in early 1992 and set the standard for racing games to come. 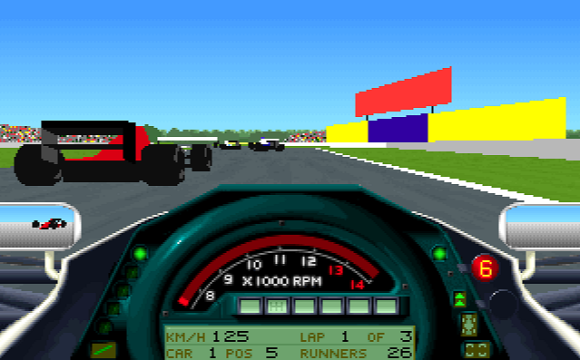 I can still remember the day in February 1992 when I was at the computer games shop. I was going to buy a game for my Amiga 500, and I had narrowed the choice down to two games: Formula One Grand Prix and Birds of Prey. I still praise my 12-year old self for going for a milestone in computer racing games instead of another bland flight simulator. Indeed, this is the game that aroused my passion for motorsports in general and Formula 1 in particular.

So where am I going with this?

First of all, it is a strange coincidence that both of these games were released in 1992. But that is of little relevance.

Yes, the graphics are dated of course. But to me, graphics are only a small part of makes a game worth playing. Playability trumps all, and these games have playability coming out of their metaphorical ears. And the conclusion to it all is that to me it doesn’t matter how good your game looks if the playability is missing. Some modern game creators should probably take note!