The Psychology of Computer Programming

I have always been a big fan of computer books. However, it is usually not books about a specific technology or tool that I find the most interesting, but books about the process and psychology of development.

In September last year I spent a few weeks on the West Coast of the USA, and one of the highlights was a visit to Powell’s Books in Portland, Oregon. There I had the pleasure of getting my hands on a first edition copy of Gerald Weinberg‘s excellent “The Psychology of Computer Programming” from 1971. I have owned the Silver Anniversary edition from 1996 for over ten years, but getting hold of a first edition was too good an opportunity to let go to waste. 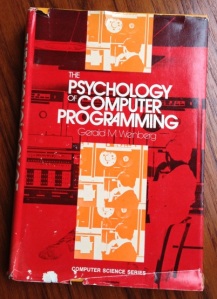 This is the book that first featured the term “egoless programming”, the concept of separating the coder from the code and the notion that having your code criticised does not mean that you are being criticised as a person. The book contains a lot of humorous anecdotes that bring the lessons to life, such as the one regarding “egoless programming” where the programmer Bill G. (yes, an amusing coincidence) feels that his code is ready for review, and asks his colleague Marilyn B. to review it.

In this particular instance, Bill had been having one of his “bad programming days.” As Marilyn worked and worked over the code – as she found one error after another – he became more and more amused, rather than more and more defensive as he might have done had he been trained as so many of our programmers are. Finally, he emerged from their conference announcing to the world the startling fact that Marilyn had been able to find seventeen bugs in only thirteen statements. He insisted on showing everyone who would listen how this had been possible. In fact, since the very exercise had proved to him that this was not his day for coding, he simply spent the rest of the day telling and retelling the episode in all its hilarious details.

Another thing about the book that stands out for me is it’s role as a historical document of how development was done “back in the days”, way before my time. The days of Fortran, COBOL, interactive terminals, keypunch operators, print-outs, etc. In the Silver Anniversary edition which features comments on each chapter 25 years later, Weinberg states his envy of current – i.e. 1996 – tools and how they make him drool (even using the term “Drool Tools” jokingly). Today, another 17 years later, I find myself drooling over today’s tools compared to what we had in 1996. I don’t even want to think about 1971.

A previous owner has written his name inside the front cover, I believe it says Jim Campbell. And as a bonus, it also included a “While you were out” card from OSECO, 3505 Elston Ave, Chicago. This is itself is a fascinating piece of history, I suppose that a previous owner of the book used it as a bookmark. Perhaps it was Jim. 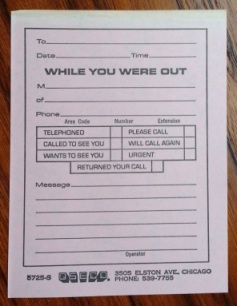 I look forward to a Gold Edition of this book in 2021!

Be the first to start the conversation!

This site uses Akismet to reduce spam. Learn how your comment data is processed.